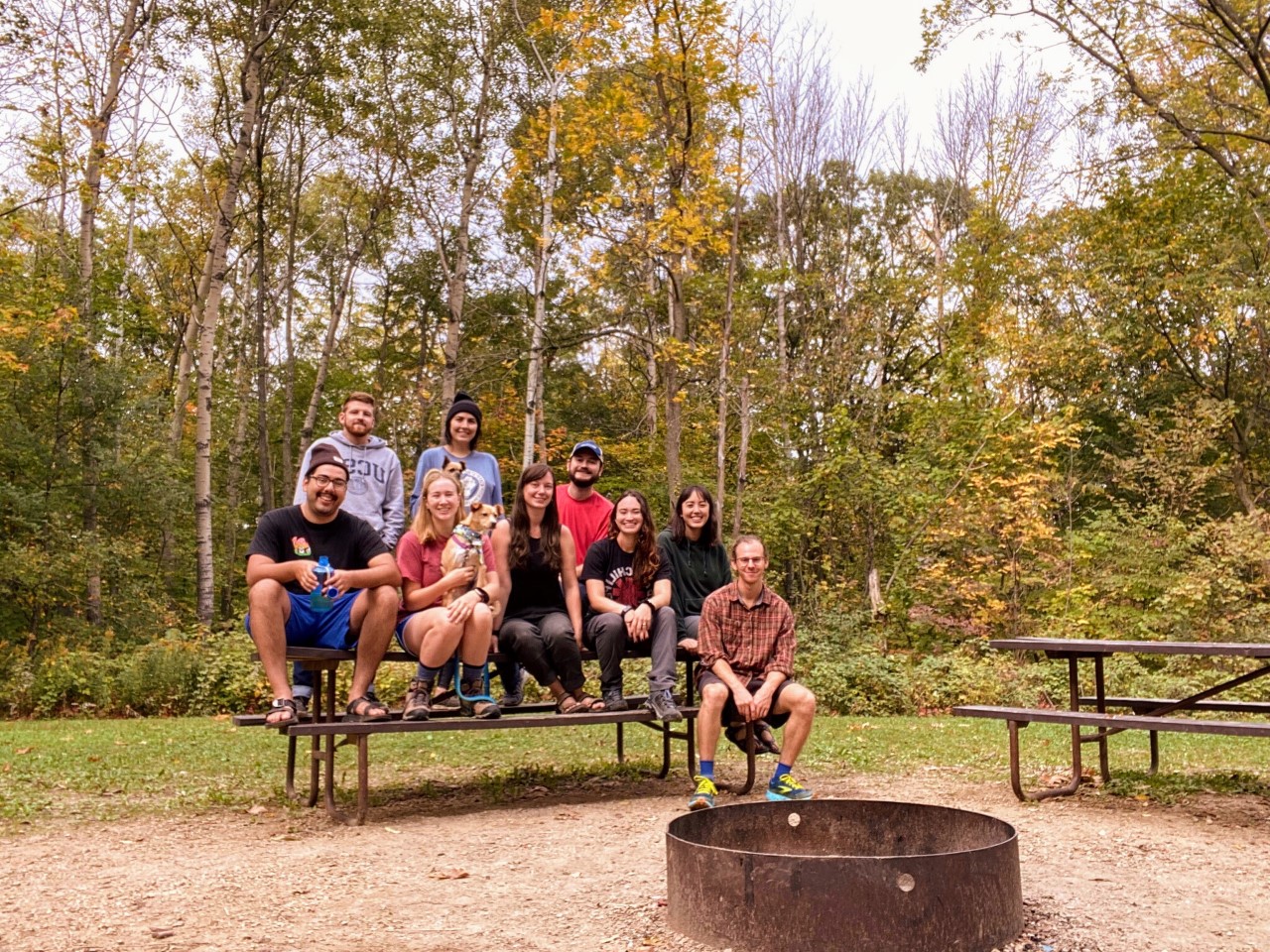 This year, I have the pleasure of serving as president for UW-Madison's chapter of the Association for Women Geoscientists (AWG). Our chapter was founded in 2019, but has been inactive since March of 2020 due to the prevalence of Covid-19. We have officially ended our chapter's hiatus though, and we organized a camping trip that took place this past weekend at Wyalusing State Park! The UW Geoscience department sponsored our trip making it free to all participants. Geoscience department face-to-face interactions and field trips have been far and few between since my time here (thanks, pandemic), so I was particularly excited to make this trip happen and have this chance to interact with some members of the new graduate cohort.

On Friday evening upon arrival, we pitched tents, built a fire, and cooked dinner. On Saturday, we hiked out to see the confluence of the Wisconsin River and the Mississippi from atop the bluffs and then wound our way along switchbacked-trail through steeply incised ephemeral tributaries to the two rivers. As you might be able to tell from the group picture, fall colors are just starting to appear in the Wisconsin River valley. I was able to guide and educate the group on geologic history of the area and even check up on my drill sites on the way out of the park. This trip was such a fun collision of passions! 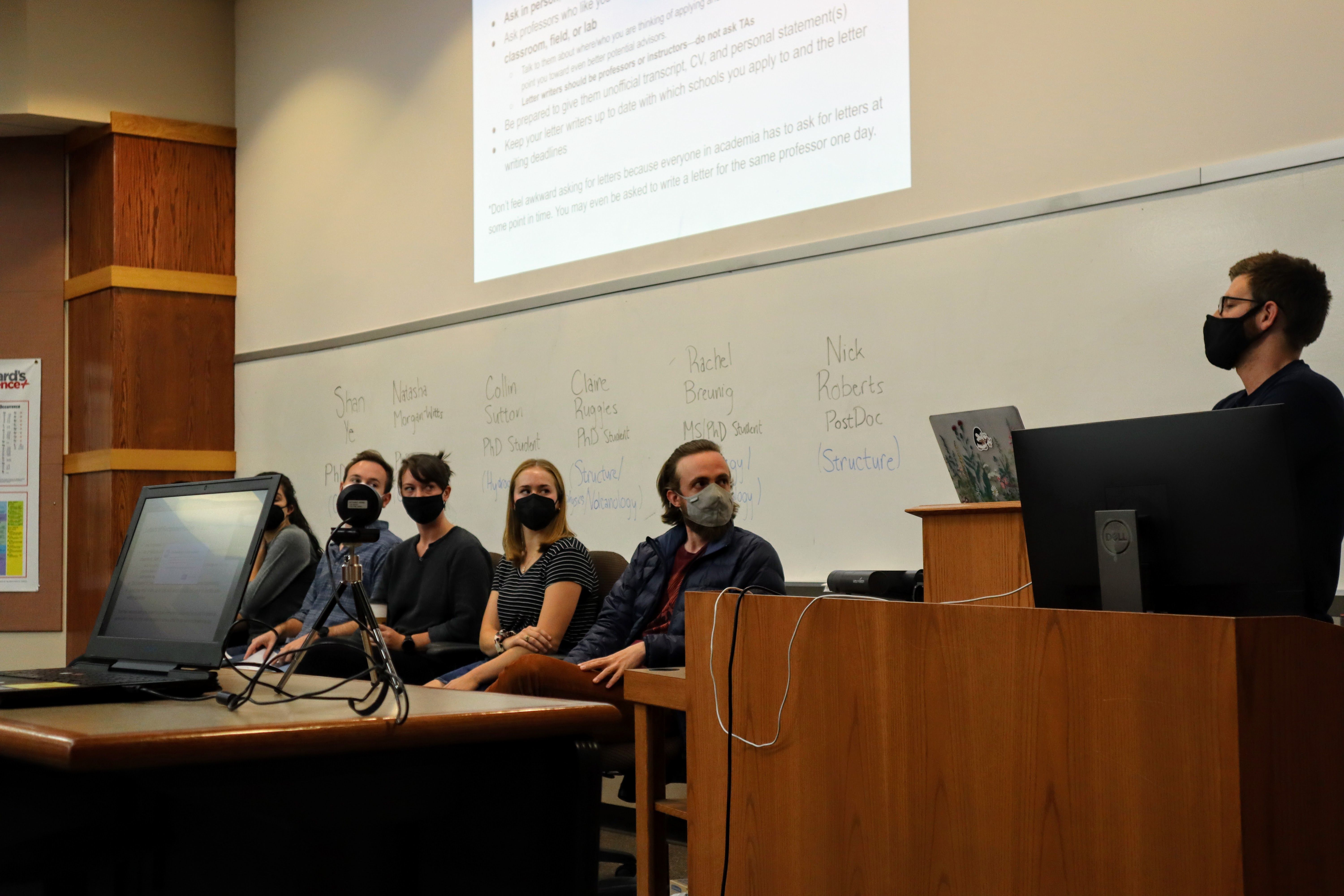 Last night, I served as a panelist for an "Applying to Graduate School" presentation hosted by GeoPath and the Association for Women Geoscientists (AWG) UW-Madison Chapter. This program was assembled in an attempt to demystify matriculation into higher education in geosciences, particularly for undergraduate students in our department. We had approximately two dozen students at this event, and I thoroughly enjoyed interacting with students, reflecting on my own experiences + pitfalls in applying to graduate school, and hearing from my fellow panelists!

This past week, I finished my second summer as an Educator with the GeoFORCE Texas 12th Grade Southwest Academy! While the academy was virtual again this year, it was a pleasure to take students on otherwise impossible trips via Virtual Field Experiences (VFEs). We visited Mars via the Acess Mars simulator, the Swiss Alps via a Moiry VFE (shown in image above), inside a cellphone with this simulator, and to Australia to explore the stromatolites of Sharks Bay. Students practiced connecting observations to inferences and applied the fundamentals of geology learned in their VFEs to pitch a plan to terraform an assigned planet.

I especially enjoyed getting to lead Water Resources Day, where I taught students through interactive activities I designed focused on water storage on Earth, different types of ice, and how water can shape landscapes! At the end of the day, students were able to identify if and where water might be stored on their planet and presented engineering solutions to keeping liquid, potable water available for their planet's planned settlement.

Yesterday marked both the successful start and end to my first self-planned drilling campaign! I had many wonderful people support me through the process, and drilling wouldn't have gone half as smoothly without their help. I would like to say a big thank you to Eric Carson and the Wisconsin Geological and Natural History Survey (WGNHS), who funded the drilling; Kai Hu and Sally Stevens, who were both instrumental in preparing the drilling sites; Patrick Penne, who served as a wonderful field assistant on drilling day; my advisors Ken Ferrier & Mike Cardiff, who have led and supported me through this point; and last but not least, Gage and OnSite Drilling, who were so patient in navigating the dense, forested topography with the GeoProbe.

At the end of the day, we were able to bring back 8 cores ranging from 6' to 23' in length. We were even able to picnic on the bluffs when coring was complete. Next up, I will be training at the WGNHS Core Repository and collecting data from our new set of cores!

Checkout these pictures from site preparation through drilling day at Wyalusing State Park! 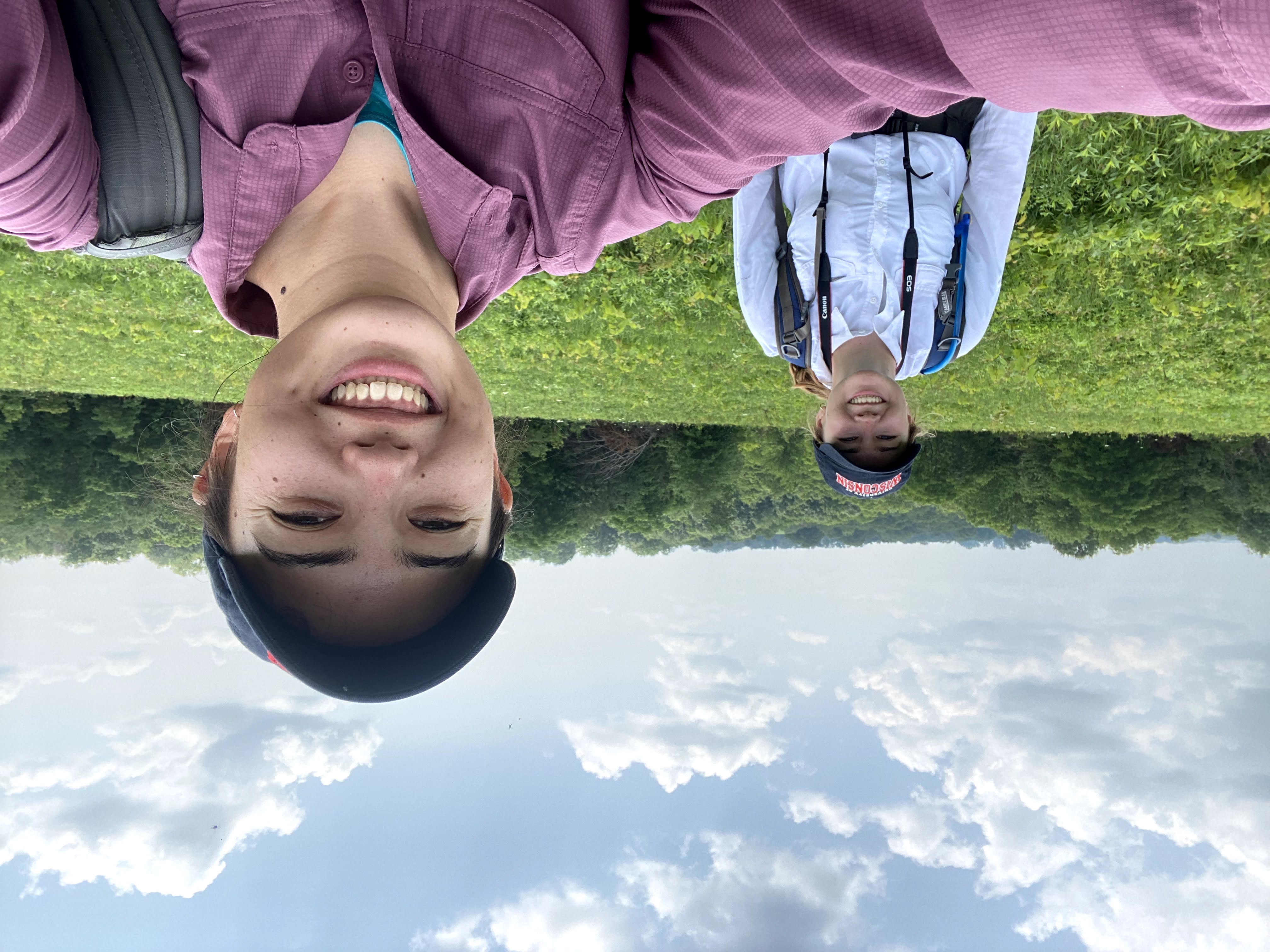 Rachel & Sally Stevens trekking to the first transect in Wyalusing. 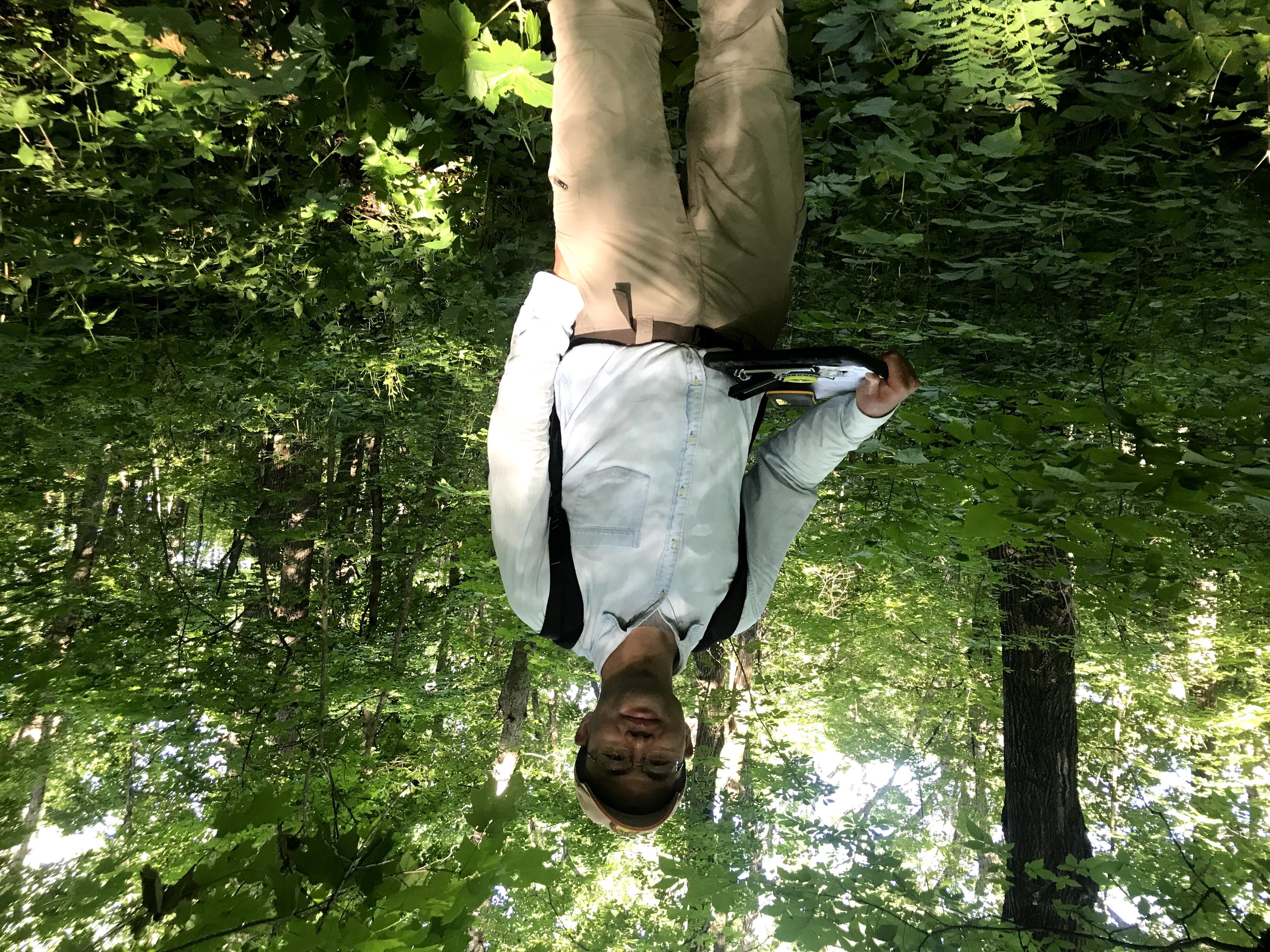 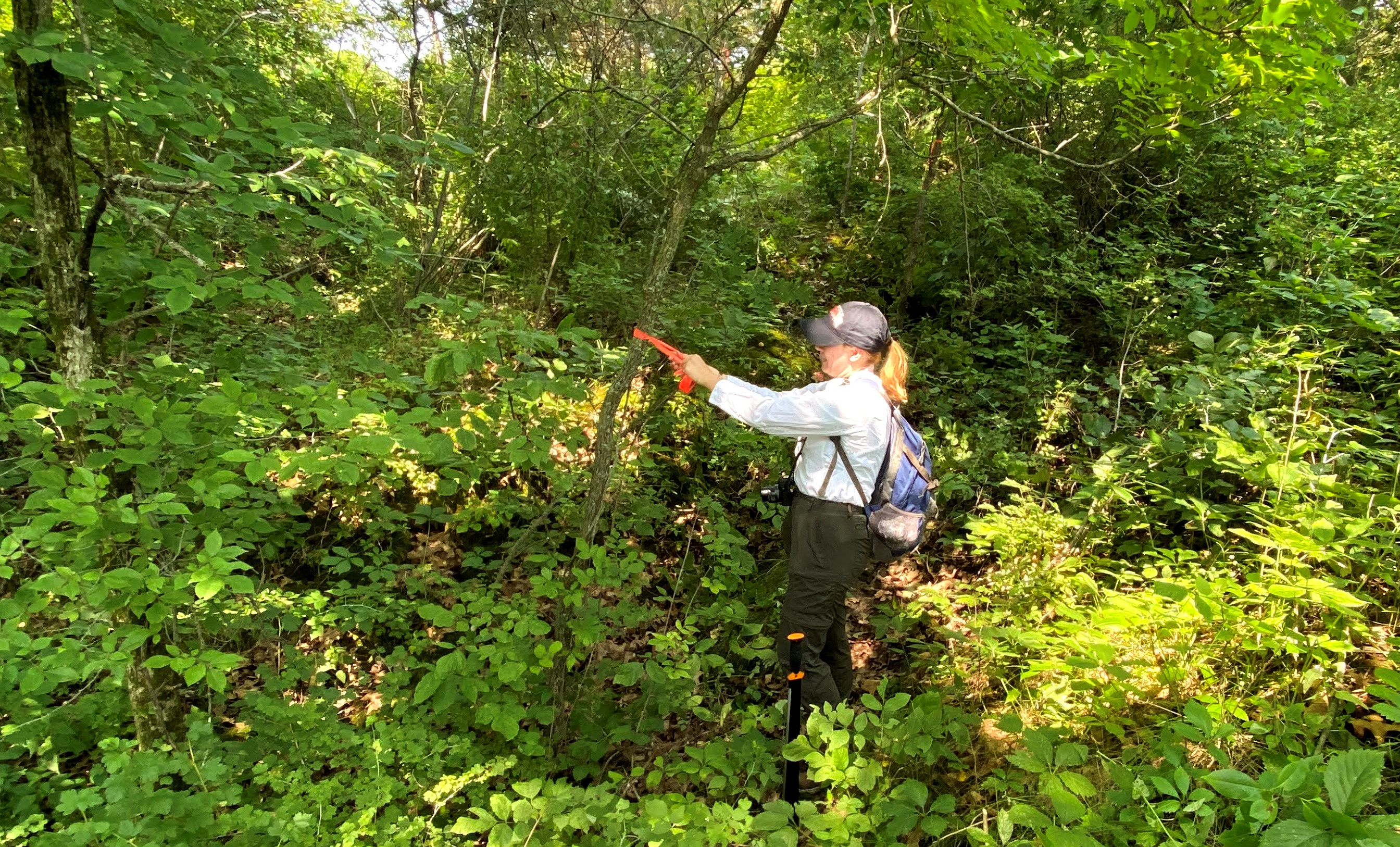 Rachel is tagging trees to provide eye-line visual of paths to drilling locations. 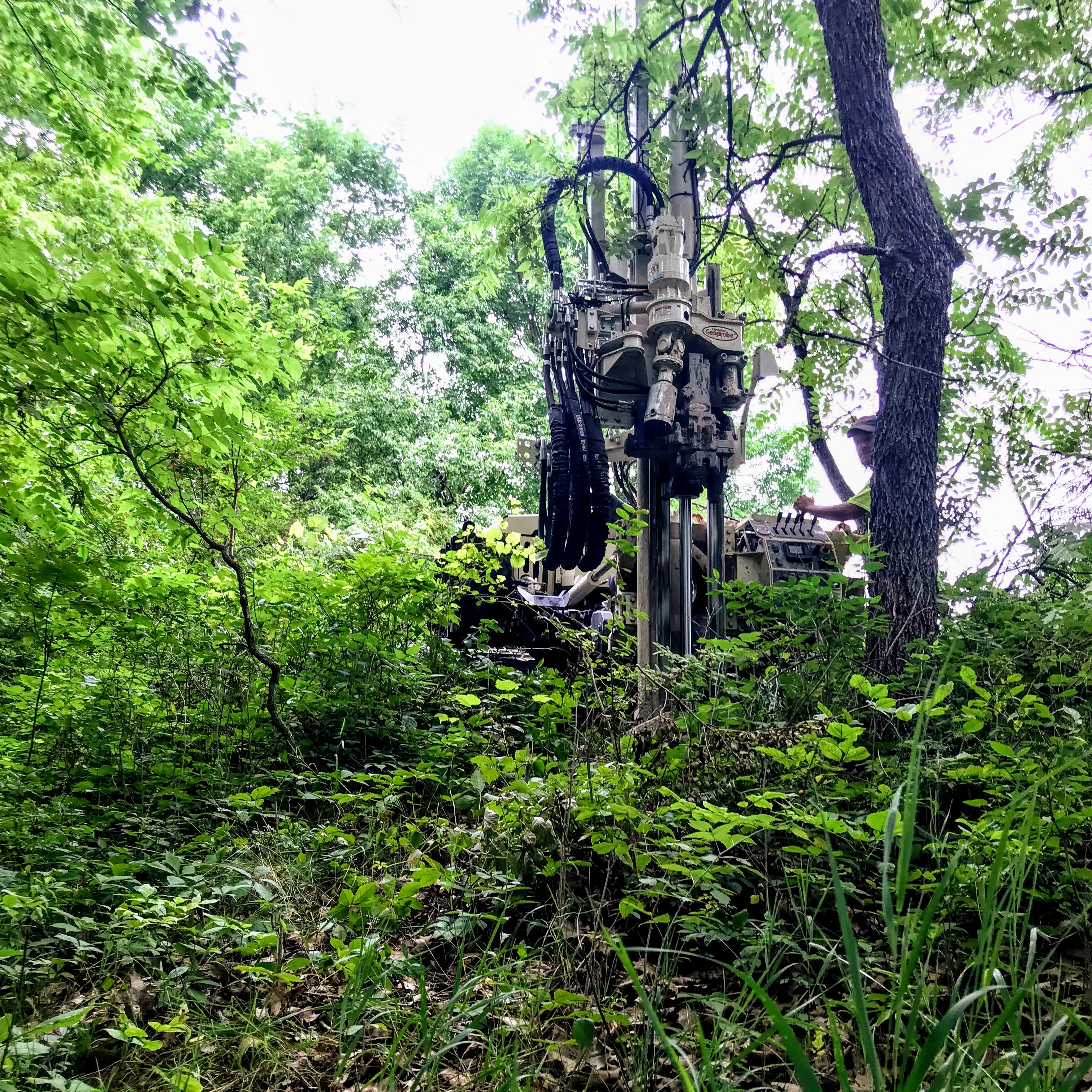 The GeoProbe perched atop the Southern ridge as it collects core. 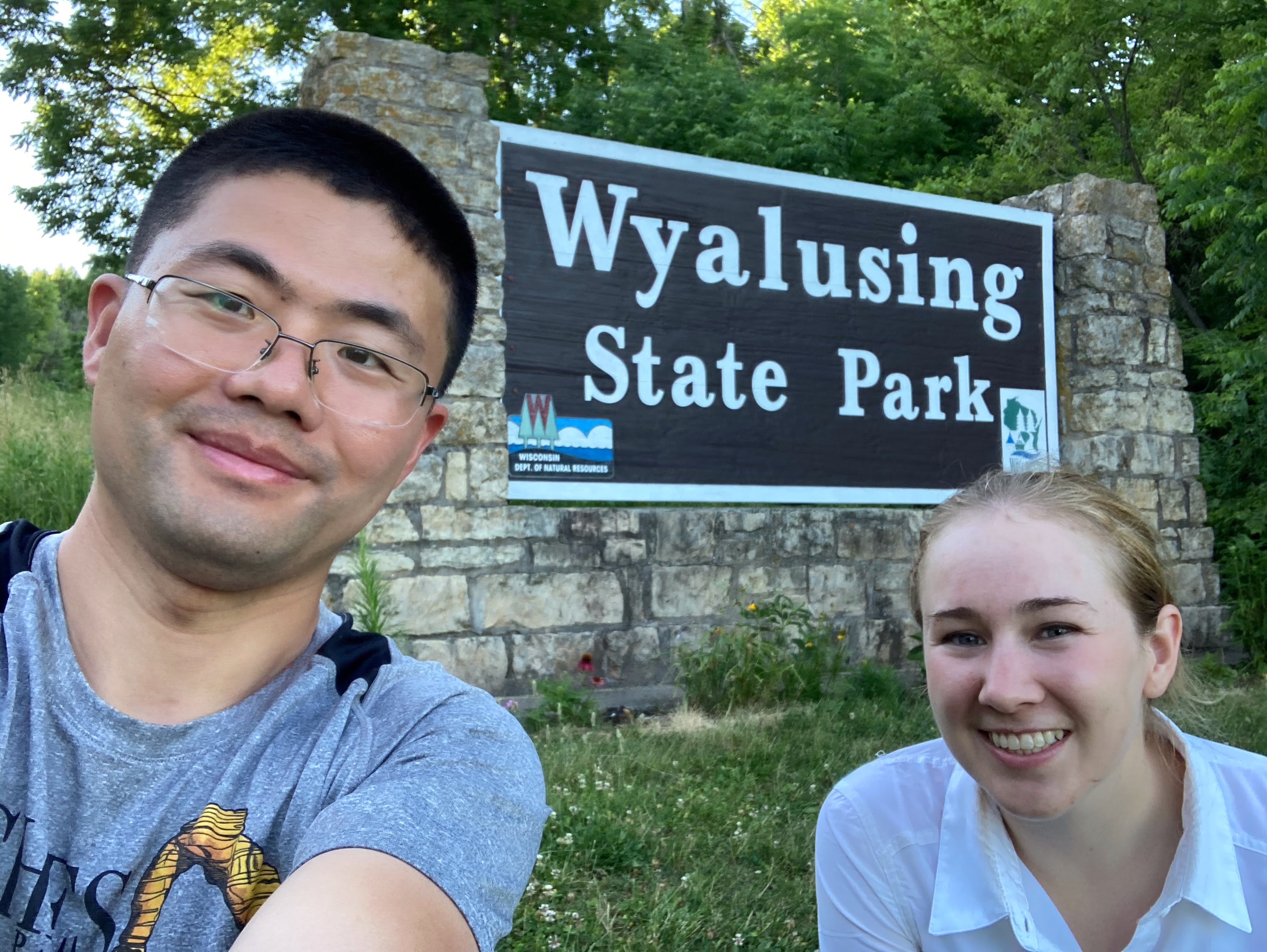 Kai Hu and Rachel at the entrance sign to Wyalusing State Park after a long day in the field. 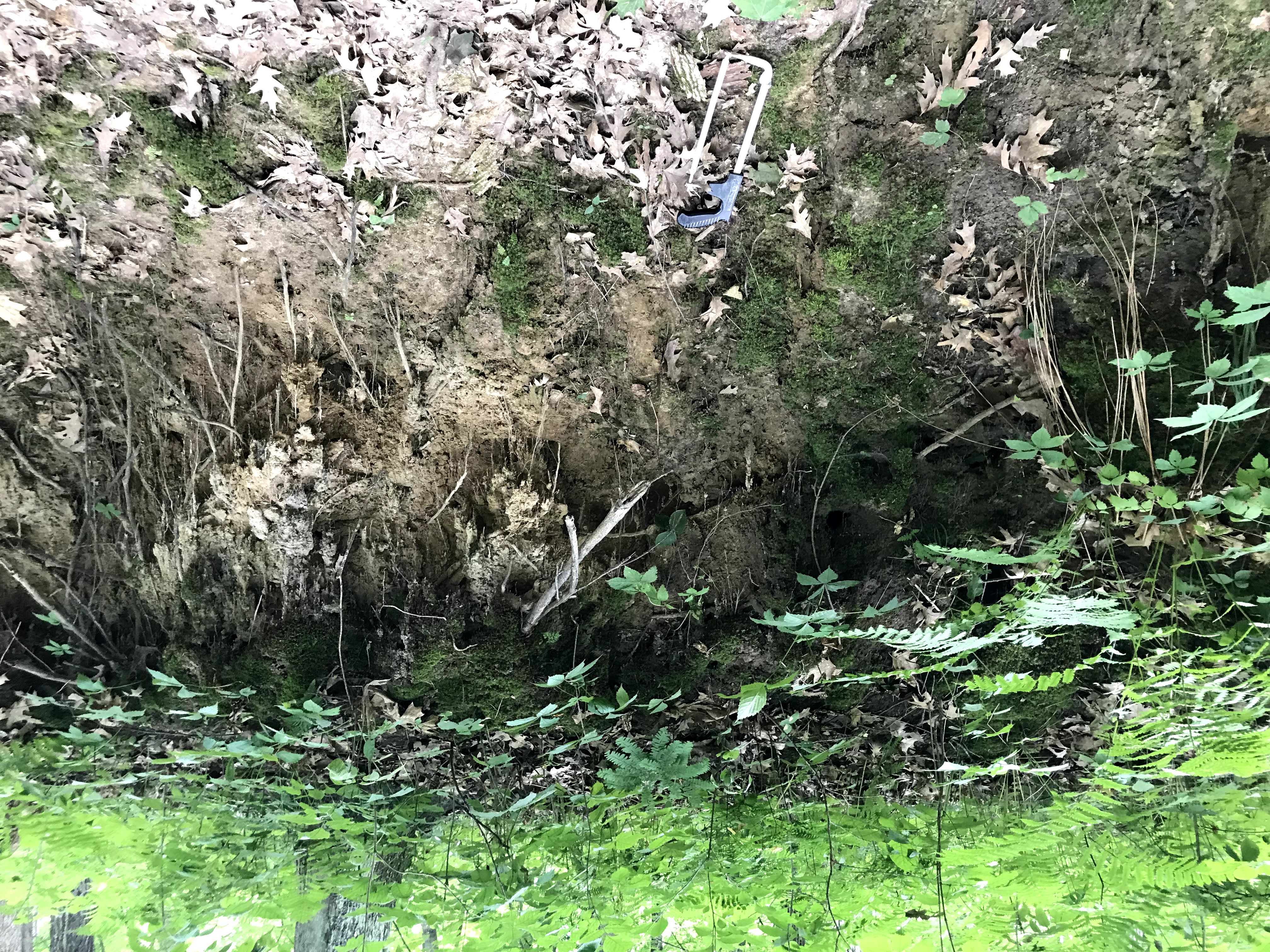 A landslide just off trail along the northern transect exposes the shallow root layer and a mat of moss along the soil surface. 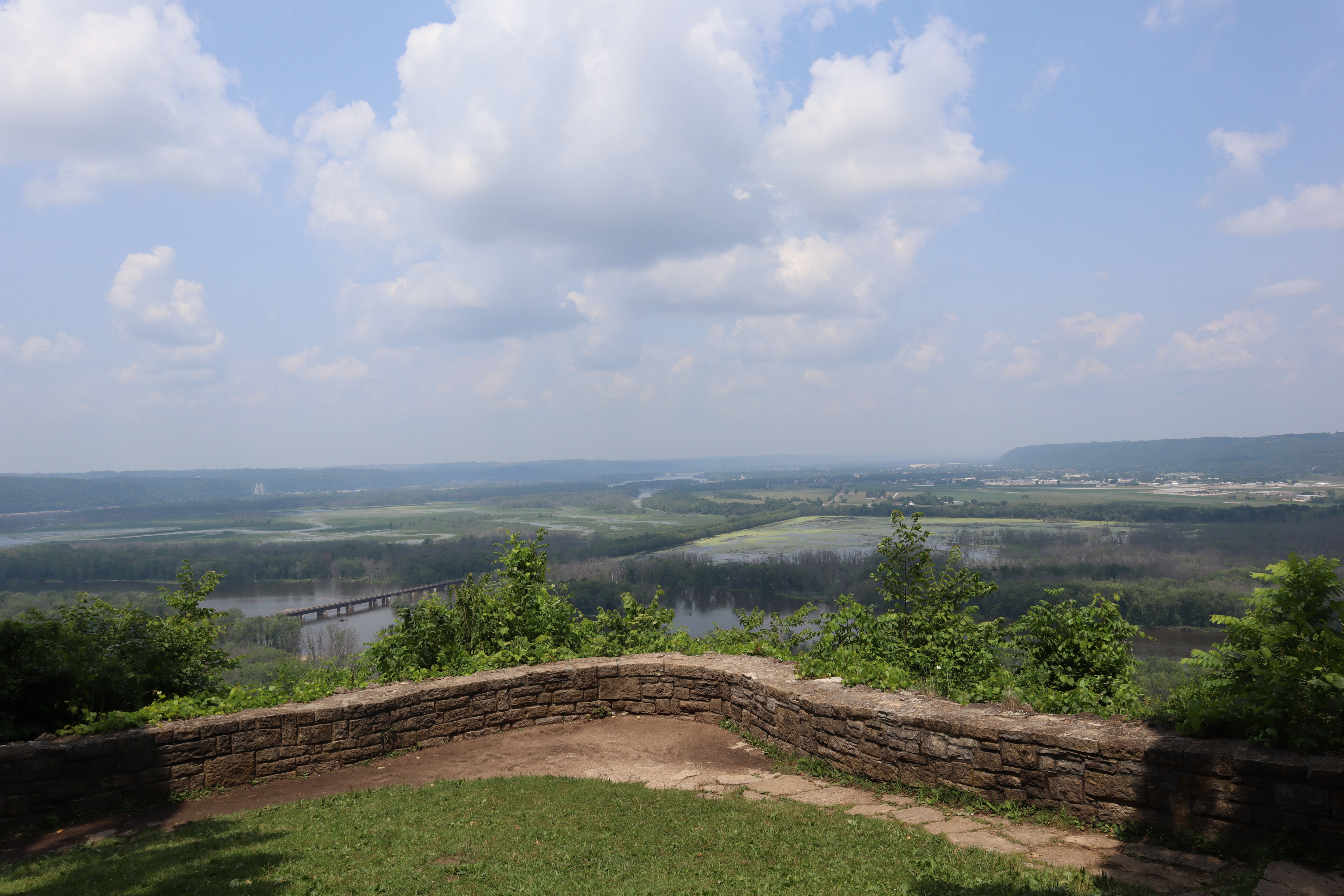 Learn more about my projects! 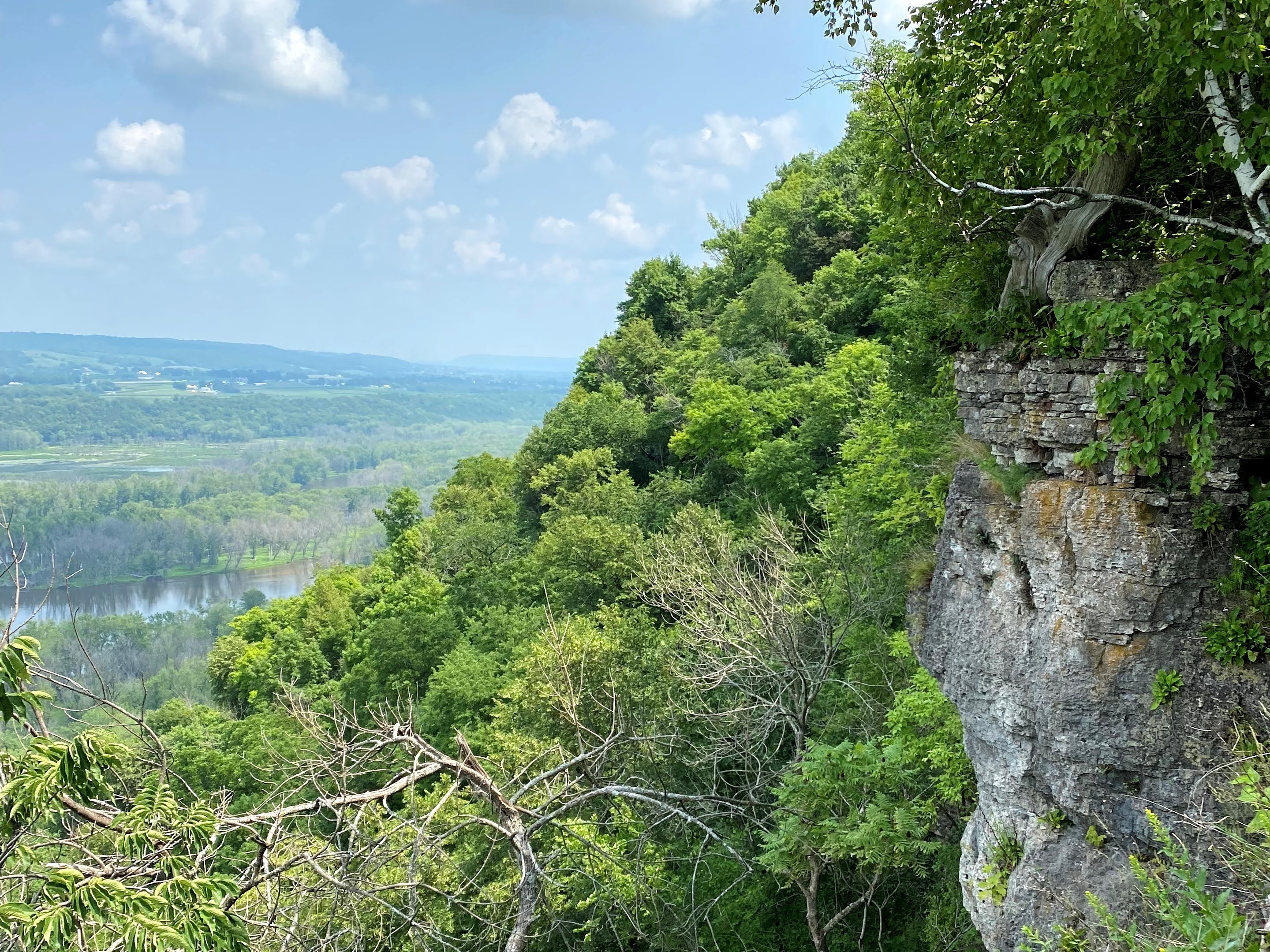 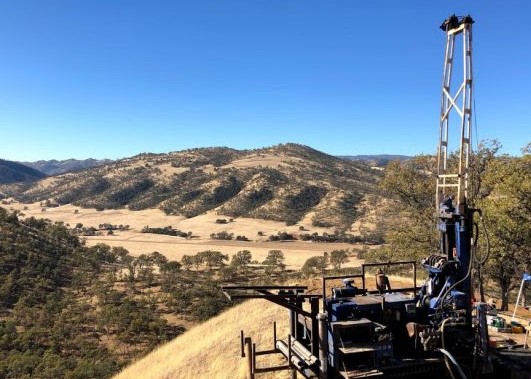